SOUTH EAST ASIA WITHOUT A PLAN

SOUTH EAST ASIA WITHOUT A PLAN
BANGKOK  14 – 16  January 2020
It’s been 31 years since we visited South East Asia. Having made the sad decision to cancel our annual yoga retreat in our beloved North Kerala, we decided we would still escape the divisive gloom & misery of Brexit & the British winter. With no fixed plan, a pair of return flights to Bangkok, two Ikea backpacks & 8 weeks to fill in between we arrived in Bangkok on the overnight flight from London.
Despite the long flight we felt liberated. Two months of as yet unplanned travels in SE Asia ahead of us & best of all the HEAT!
It was early in the evening & the sun was setting over the city skyline, our taxi taking us past glittering traditional temples, wats & palaces now competing with 21st Century skyscrapers & busy highways, decrepit residential enclaves & ramshackle shops & street vendors. The 1980’s spectacle of entire families piled into Tuk Tuks & the heavily overloaded motorcycles, that had made such a big impression on us 30 years before, now replaced by bumper to bumper crew cabs, 4×4’s, yellow cabs & huge lorries & a heavy cloak of pollution. 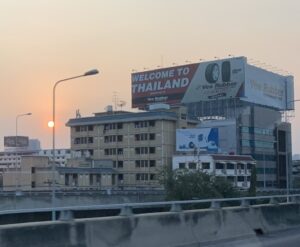 Our home for the first two nights Arun Old Town Hostel  was set on a busy road & set back a few blocks from the iconic riverside Arun Wat (Temple of the Dawn)
Once settled into our small but clean & modern room we set out to explore.
The darkness falls quickly in this part of the world & our decision to head towards the nearby riverside & temple turned out to be a fortuitous accident.

The doors to Arun Wat were still open, the grounds all but deserted, so we decided there could be no harm in venturing inside. The vast temple & surrounding buildings were illuminated & no one seemed to be bothered by us wandering around. 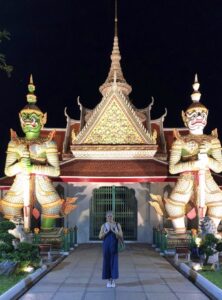 The only people we saw were a few monks sitting out on the steps of their nearby accommodation incongruously checking their mobiles. A sleeping security guard lolled obliviously at his post & a couple of docile dogs paid us no attention as we strolled around the temple grounds undisturbed.
This impromptu visit certainly made for a spectacular opening prelude to our 8 week trip.  Leaving the illuminations of Arun Wat behind us we ventured further through the scruffy streets of The Old Town behind the river looking for a suitable place to eat.  We set ourselves the goal of finding a modest restaurant right on the riverside. Surprisingly not an easy task but our determination paid off, despite the late hour we eventually stumbled upon a place that agreed to serve us.
Perfect.
Our first night in Bangkok we were enjoying the river breeze, a front line view of the comings & goings of the boats, the Illuminated temples, the Grand Palace & the upmarket hotels across the river.
DAY 1
Having no difficulty it seemed adapting to the time difference we set out early on our day of sightseeing in Bangkok. First up crossing the river from Arun Wat pier to Pier 8 where we immediately spotted our breakfast spot. The aptly naked Riverside Cafe is a modest cafe serving Thai food right by the jetty with tables & chairs set beside the waterfront.
Breakfast consumed we set off to walk around our next major temple complex, complete with reclining Buddha, endless shrines & effigies, wats & carvings galore.

Having intended to then move straight on to the Grandparents  Palace – my refusal to change my perfectly acceptable top & scarf at the insistence of the fashion police on the door with a hideous Tshirt meant a change of plan. As it was already 1.30 & we were springing into holiday mode that could only mean Beer O Clock in Elisa & Dom world.
Passing through the dark market alleyways beside the river we found ourselves a hotel with a roof terrace bar being advertised & headed up for a light liquid lunch. A panoramic view to our’ side of the river & Arun Wat meant another box had been ticked.

Next up a hop on hop off ferry ride to see a bit more of the city while being cooled off by the river breeze. Excellent plan. It meant we got to visit the amazing flower market & see the more of the new buildings along the waterfront & watch the comings & goings of the river. Long tail boat taxis weave among the ferries & tugs pulling rafts of barges, smart hotel launches & traditional style junks, boat yards & fishermen, smart luxury shopping centres, traditional pagodas, piers & temples & a back drop of sky scrapers. Bangkok’s  river has it all.
Bangkok’s enormous flower market was one of the spots we decided to get off to explore. Although it says it’s open 24 hours, the market only seems to really get going towards the end of the afternoon. We strolled among the stalls watching the traders  prepping for the evening’s customers. Definitely not to be missed – so many flowers – unfortunately we weren’t able to hang around to see who buys it all.

Getting back on our ‘Hop on Hop off’ ferry we headed back for a pit stop at the hostel. For our second night in the city we caught the ferry from
the Wat Arun pier to Tha Tien. Cutting through the alleyways behind the river we soon noticed an unimposing sign directing us to a pop up roof top bar with direct views across the river to Wat Arun. We never knew the name of the place & it doesn’t come up on the map but it was a contemporary little place where we enjoyed some typical Thai food at an affordable price in a perfect location. A spectacular sunset quickly followed by a thousand lights illuminating the temple buildings, bridges & supper boats plying the river created the perfect back drop to our second evening in this sprawling vibrant city.
DAY 2
With a train south to Hoi An to catch at lunchtime & a second attempt to gain admission to the Royal Palace we left our rucksacks at the hostel to make an early raid on one of Bangkok’s most popular tourist destinations. Despite the  time visitors were already thronging towards the palace gates through an elaborate series of crowd control barriers. With visitor numbers to Thailand from China & South Korea already visibly down as a result of the Coronavirus we were privately quite pleased not to be there during a peak period!
Now that I was apparently more appropriately attired, a slouchy grey T-shirt & long baggy trousers in place of my elegant pashmina wrap & mid calf summer dress of the day before we entered the Grand Palace Grounds without veto by the royal style police.
The Grand Palace in Bangkok is spectacular. As a child I had loved Rogers & Hammerstein’s musical The King and I.  The 1956 version of the film was based on the memoirs of Anna Leonowens governess to the children of King Mongkut of Siam in the early 1860s & the subsequent 1944 novel by Margaret Landon, Anna & The King of Siam.  A romantic story set the film starred Yul Brynner & Deborah Kerr & featured the song Shall We Dance Which throughout our visit that morning played like an ear worm in my mind.
Even today The Kings of Siam. Now modern Thailand are  venerated as gods & detached from the reality of daily Thai life. 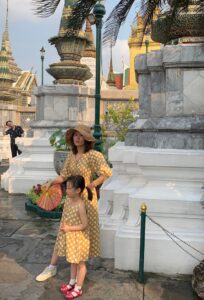 For all the grand surroundings & nostalgic memories of a childhood fed on a diet of Hollywood musicals,  I spent most of our visit people watching. The truly bizarre fashions paraded by the tourists milling around the grounds somewhat incongruously eclipsing the buildings themselves!

Humming ‘Shall  We Dance’ from the musical the King & I  – I have to say the best part by far for me was people watching .  The irony that there is actually a dress code to visit the royal palace seems to have bypassed any nod to good taste or indeed contemporary international fashions.
Travelling via Bangkok’s pristine underground to the main train station was made more convenient by the fact that the metro station was a stone’s throw from our hostel.  Rookie good luck there.
Like so many others, Bangkok train station is like stepping back in time. The vast concourse, the high cathedral like roof, the milieu of assorted travellers both local & from overseas. We love a traditional railway tiffin when in India. Here we reacquainted ourselves with the voucher system favoured by Asian food courts. For the princely sum of approximately 50p per head we were rewarded with a princely feast of fresh seafood, veg, noodles & wanton. Certainly beats a Costa coffee & an indifferent sandwich back at home 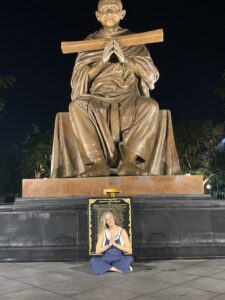